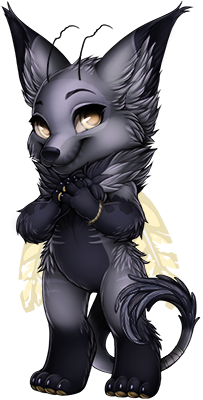 Basic Stats:
Gender: Male/Genderfluid
Age: Adult (approximately 25 years)
Species: Draffe (original species by Nawth)
Orientation: Pansexual
Elemental Ability: N/A
Location: Wanderer; he will live wherever he can until he wears out his welcome. He prefers to stay around largely populated regions as he can more easily remain unnoticed. He has lived in just about every different type of area, so he has learned many of the dialects & customs that are observed; this also helps him to blend in. He has a preference of warmer climates.


Personality (ESTP | Neutral Evil):
+ Very adaptive to different situations (can survive pretty much anywhere). Charming, alluring, and charismatic. Persevering and tenacious. Hard-working and diligent. Great sense of humor/ability to make people laugh. Quite intelligent. Above average problem-solving skills. Loves to tinker with things, and is a great "fixer." Thrillseeker who lives in the moment, and appreciates adventure.

- Narcissistic jackass (has chronically shown illusions of grandiosity, an overwhelming need for admiration, a preference of codependent relationships, and difficulty relating/empathizing with others). Stubborn. Impatient, has a bad habit of needing instant gratification. Addictive personality. Does not like showing weakness or asking for help. Pathological liar, manipulative, deceitful. Sardonic and cynical. Borderline sociopath. Has lots of baggage and emotional hangups due to a traumatizing past.


Backstory:
It's a mystery from what area he originally hails, and his name is ambiguous so it doesn't give much away about who he is. He has a questionable past, but he doesn't discuss it much. From the little bits he's divulged (which are actually true), his early years were not at all pleasant. He only ever tells the truth about who he is when he is intoxicated. Otherwise, he will completely fabricate stories about himself.

Effeminate, beautiful features contrast greatly with the tattered wings and clothing, and he uses those good looks coupled with his charm (and a dash of manipulation) to make people look beyond his ratty appearance and win them over, People do have a habit of distrusting him right off the bat, which is probably for the best, but he's devoted much of his time to learning how to get past peoples' first impressions. Once he has someone feeling comfortable enough, he can effectively take advantage of him or her.

He makes a living as a "snake oil salesman" of sorts (basically a con-artist), taking whatever he can do/sell and turn a profit. He sells (mostly faulty) goods in exchange for food and items of value, and has been known to have an affinity for gambling--though his luck usually runs out quickly. He's extremely street smart and intelligent, but his intellect is not utilized in a very "socially acceptable" way. Although he will occasionally partner up with someone else for business reasons, he prefers to work alone.

Being that Fizzle is a fairly narcissistic person, his overconfidence and bravado have gotten him into many a bad situation. He's been in lots of scraps, and as a result is an above-average fighter (though not overly strong by any means). The only huge advantage he has in fights is his speed and cunning; however, if the scuffle becomes aerial, he doesn't stand a chance. In any case, manipulation and deceit are the most refined tools in his arsenal, and he would much rather use brains than brawn if possible.

He's also something of a trollop, having no qualms about whom he gets into bed with- be it male, female, or other. Since he's such a smooth-talker, he often uses dirty tricks and false promises to seduce his partners, only to leave them in the middle of the night. Needless to say, he's made plenty of enemies in that manner as well. Probably even has a few draffelings running around somewhere..

Fizz prefers to stay on the ground because flying is much more difficult for him (though still possible). He certainly does not like other people to see him struggling, so if he does absolutely have to fly somewhere, he tries to make sure no one is around. And probably, even more importantly, he does not like to admit to himself that something about him is not perfect. He cannot stand feeling weak or abnormal. Therefore, if possible, he will find ways to climb or jump if he needs to get up somewhere high. Because of this, he has grown large claws and developed strong muscles in his arms and legs. He also commonly wears bandages for extra support, since climbing is a decently rigorous exercise for a being that has evolved the ability to fly.