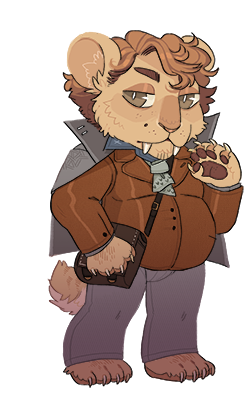 Sascha is steady and calm, a reliable and tactful character. More independent and less sensitive than the busy-minded Hollis, Sascha doesn't feel things particularly strongly - that's something he's always been prone to, but that has become more pronounced over the years. He has a good sense of what he ought to feel, however, and plays that part well; it's convincing to those who don't know him intimately, and he has a way with people. Sascha likes to imitate sensitivity, writing songs and sketching, but it all feels sort of affected for him.

He's somewhat burnt out, but it's quiet. It used to be Sascha was simply stoic but still warmly mature and energetic, impressive and generally a Leader Type. Now he avoids genuine introspection; his biggest issue is that he just has decided how the world and his life are and can't care enough anymore to make any effort to fight them into being something else, or put serious thought into the fact that he could do that.

So his view of himself is not entirely accurate. It's a bit falsely static. He distances himself from the reality of life and remains calm, quiet and removed, an observer of the world.