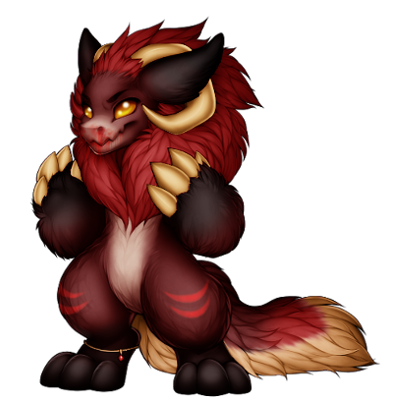 If opportunity were an egg, Lucius would definitively be a nine egg scramble, wrapped in an omelette, wrapped in a crêpe, stuffed into the eggiest cake that you've tasted, served with a side helping of devilled eggs draped in eggy avgolemono that is generously layered atop a madame croque. It would certainly make you quite sick, were you to consume it, yet not quite as sick as the absent, if not corrupted, moral sense of our Lucius.

When in the company of regular citizens, Lucius appears to be quite polite, composed and generally a gentle being. The Wickerbeast stands at your side, offering friendly chit-chat and whatnot, but you notice that his attention keeps drifting away - and whatever has got his attention seems to arouse a distinct sparkle in his eye... and also, it appears to make his nose bleed out in large, uncontrollable gushes. Mind you, these gushes are not unlike the perverted sanguineous nasal burst-spray displays of Kame Sennin himself. The question is, is it the orphan standing beside you, or is it the trinket held by the orphan that induced this behaviour from him? Don't you worry. You'll soon find out. After a moderately lengthy nose wiping session (and about a dozen 'ahems'), he mentions that his name is Lucius, the noblebeast. But if you leave one blind orphan with a seemingly valuable trinket, turning your back to them for even just a passing moment while you haggle your way into a fairer price for that absurdly overpriced ice-cream that this very, very sly white fox is insistently trying to sell you because "...that noticeably blind, vulnerable orphan needs a good treat this very minute..." Lucius will snatch that very trinket from the orphan in an instance, without hesitation, as if incapable of objectively and consciously considering the moral implications of robbing a blind orphan, no matter the stealth involved or how inconspicuous the deed. He strikes at any opportunity. Any. And so, the trinket is missing, the blind orphan is stoked about the ice cream and the once lingering Lucius has slipped into the shadows behind a walled post where he is well hidden ... or so he thinks, anyway. You can see the large shoulders that protrude from either side of the post. Since you've seen no other Wickerbeasts in the area, it is safe to assume who it is. As you approach him, you begin to ask him about the golden trinket that seems to have gone amiss. You had handed it to the orphan when you went to fetch your coin bag. And since nobody else was around, again only he could be held accountable for this horrid theft. Suddenly, the Wickerbeast from before presents himself, but now wearing a monocle and an inside-out beret.

"Oh, you must have mistaken me for somebody else in the area. How do you do, stranger?" says the poorly disguised wickerbeast. The Wickerbeast greets you with a forced smile. You respond by stating that the disguise fools nobody and you explain that there's hardly anybody else around to be mistaken with, other than the fox ice-cream vendor and the orphan. You ask again, "Where is my ornament, Lucius?" The Wickerbeast, with one hand behind his back, a little annoyed, challenges your claims, "Is that so? I'm deeply offended that you would explicitly ramble on with such statements about whom you know nothing of. Preposterous, I declare! You need to take better care of your property. It is certainly no fault of mine, nor my responsibility to remedy your foolishness!"
You place a supine hand out to him and ask to see your trinket, which he has hidden behind him. You give him a rather stern glare, but of course, the Wickerbeast continuously refuses to look you in the eye at all. He wears a monocle, but keeps his eyes closed anyway. You notice him peek with his other eye every now and then. You get the impression that he doesn't want to be here and is looking for the first chance to escape your company.

He shakes his head in denial and says, "Are you so sure? Let me guess. That stray pigeon is the judge," he points to something behind you but you know better than to look. "...the orphan is the jury and so you must be the executioner...? Nonsense! I demand a fair trial! You have no evidence against me! I simply do not have your golden... umm-" he looks behind him then back to you "-umm... carrot-thingy." Before you could respond to, or even process this peculiar form of verbal defense, a black shroud of smoke seems to have overcome the immediate area around you. As you struggle to breathe and cough, you hear heavy footsteps run, followed by a car door slamming shut before you hear a vehicle drive away with tires screeching and all. Oddly, the vehicle seems to be playing the ice-cream van tune as it fades into the distance.

Lucius is quite pleased that he has scored himself one carrot of gold. As for you, well, it looks like you will probably have to go back to the 99 cent store and grab yourself another fake ornament for your festive kitchen decor. What an inconvenience indeed.