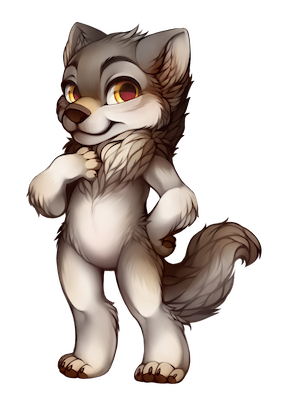 Paintie is still in the works

Nix is quite the strange little lady. For a start her exact age is actually unknown, however a rough estimate would place her between a human's late-teens to early adulthood, and her ability to hold a conversation is more than possible but fairly broken and disjointed a lot of the time despite speaking the language of the village in which she apparently comes from.

She doesn't let on to her past very much outside of living alongside a human for a number of years (potentially whom she may have learned her language from, which only raises more questions) as well as where she got her surprisingly cute finery from... which is less cute, I suppose, as she was apparently nude at the time and happened upon a pile of clothes outside of a nearby home.

Oddly enough, Nix doesn't quite understand the concept of thievery unless it involves food, which is another interesting point. Outside of that she is usually very quiet and unassuming of others, preferring to keep to herself, what few thing she owns and the simple trades she was taught by the aforementioned human.

Those dabbling in alchemy or some form of magical practice often sense something unusual about Nix; an aura of questionable origin and intention although no-one can ever quite put their finger on what, or who, it might be. It appears as though it's not malicious and more mischievous, which only makes Nix even more of a confusing individual.

On the earlier topic of food, Nix doesn't usually use her hands to eat unless the situation demands it (which is never often), opting to just cut out the middleman and use her mouth very much... like... a wolf...