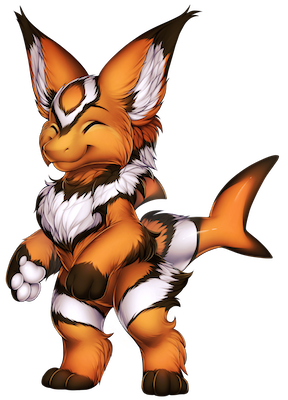 Cleo grew up play fighting–and sometimes real fighting–with her four older brothers. That is, until she got to be better than them. Then they wouldn’t fight her, because they couldn’t stomach losing to their younger sister. Cleo decided that if her brothers wouldn’t satisfy her need to compete, she’d have to take her skills to a higher level. She convinced her parents to let her train to be a professional fighter, promising them she would use her skills only for the joy of competition and to serve her village.

Cleo now gets her competitive fix fighting off the monsters that intrude on the fringes of her village. She is hard-working and never, ever backs down from a fight. Sometimes this doesn’t work out so well for her medical bills, but Cleo isn’t one to shy away from a few cuts and bruises.

At heart, Cleo is just a peppy manokit, and super fun to be around. During her time off from training and fighting, she enjoys exploring the city with friends. She’s 100% on board with the unicorn food trend. If you want a friend as fiercely loyal as she is fierce on the battlefield, Cleo’s your girl. Just be careful or she might accidentally shishkebab you on the end of one of her swords!

About Bastet:
Cleo is a bit too... smiley for what most would see as a respectable warrior. Having heard that many of the greatest warriors in mythology had familiars, she decided to adopt a pal of her own. She selected a black pumpkitty and named her after the warrior goddess Bastet. Unfortunately for Cleo, she picked the kindest kitten of the litter and all Bastet will do is rub against enemies' ankles and purr.