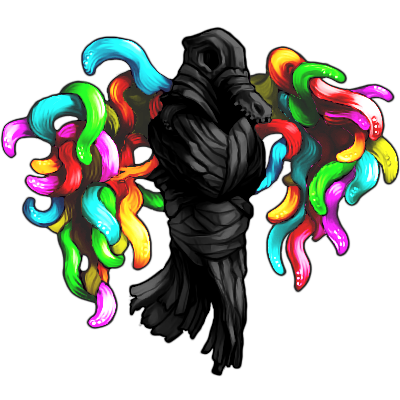 Gummy is on the quest for the Badger Pika.

You approach an old shack. When you open the door, an elevator is inside. Wanting to discover more, you head in.

The place suddenly looks futuristic with white plastic-metal plates on the walls, neon blue and orange straight lamps lining the gaps and many gadgets! You see a machine incubating eggs with another feeding young minipets, most commonly Flittens and Pythons.

A shiver suddenly goes down your spine as tendrils, that looked similar to a Fallen Angel's, slithered around the corner. But they were... rainbow-colored and jellylike? You silently drew your knife in fear and confusion. A sooty Fallen Angel's body emerged, darker than that of the regular Angel. The figure seemed somewhat cheery...

The strange Fallen Angel took a small Python out of the feeding station with some of its gummy tendrils. You watched as the character fed the python a small portion of one of the tendrils, which you had figured out were actually gummy worms. The portion it had ate grew back instantly and Gummy made a happy expression with their eyes. The strange creature hadn't really acknowledged the fact you were there.

Gummy is a Fallen Angel that decided to turn their snakes into gummy worms! They let the minipets nibble on the gummy worms. Gummy doesn't feel the nibble as pain, they feel it as a tickle! Plus, the gummy grows back instantly!

In their spare time, or when they're tired of breeding, Gummy will train their warrior skills.

They speak a food language that all the food creatures know. It includes both actions and sounds.

And the art begins!