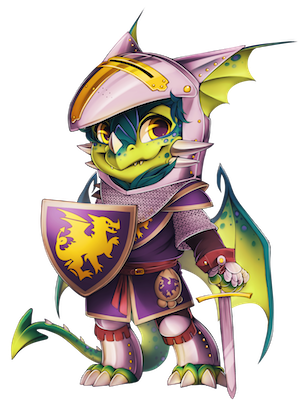 Garth was once a quiet white lion living happily in his tinker shop in the mountains, occasionally visited by the nearby villagers when they needed his skills. As an alchemist, the lion enjoyed hunting for his own herbs, though Marikh often dropped by to offer extras from his pots. Garth created many things with his concoctions, from rabbit potions to miracle gro, which he'd promptly handed back to the herbalist in exchange. He even found the schematics for the rarer Dutch AD and Shifty.

Most of his experiments remained close to home, the one that was splashed on a certain bearded vulture's egg was never found, nor the one he gave Adhonis, which turned her into a mythical blue creature. The last one, however, had an unforeseen effect: it turned Garth himself into an overly fuzzy beast named Eshari.

For a long time, the 'monster' was afraid to be seen, lest the villagers hunt him and kill him, becoming all but a recluse. That fear was put to rest when Kadhael offered him help and the unflappable leader of their village made no mention of the night-spotted transformation... though the fiery cat does enjoy hugging the fluffy wickerbeast.

Who knows what else he'll dump on himself this time? He nearly gave himself too many limbs earlier. Luckily, Eshari only dumped a dragon morph on himself. Unfortunately, that limb pot seems to have disappeared.