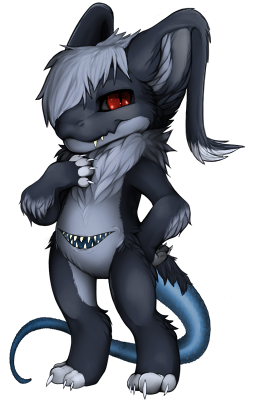 Korvek is an all around strange fellow, prone to sudden shifts in mood. One moment, he's his usual flirty, lazy, mischievous self, then another he's completely disinterested in everything around him and quite irritable. He himself doesn't know why his mood shifts so dramatically, but he prefers for it to happen as little as possible. His general affinity for laziness keeps him in Dragonsmaw most of the time. Unless the need is dire, he has to be prodded or bribed to actually do anything productive.
He will tease, and most times annoy, anyone he meets no matter if it's the first time they've met or are already good friends. Though he will eventually lay off if they start showing real distress.

He enjoys fighting and is quite good at it. He relies on speed and quick, precise attacks to wear down his adversary, but he has little stamina so he has to win fast or flee. In battle, he's almost completely feral, sometimes even threatening his own allies if they get too close.

He's a fast learner and quite good with his hands so, in addition to fighting, he's decent enough at constructing and forging. Though his dense fur makes staying near the heat troublesome, so he only works with metal and fire when he has to.

He and Quill do not get along very well as Quill enjoys keeping himself busy and having personal space; two things Korvek has no desire to understand.