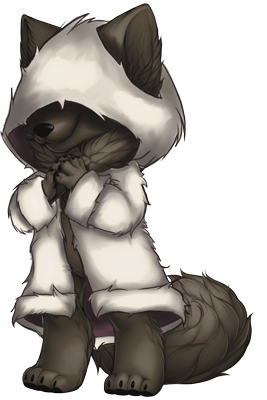 Bath Kol appeared one day carrying a huge, white-grayish furry coat she found in the woods. All the girls found it lovely and tried it out, joking and fooling around, until Liana screamed scared: "-I felt it moving me!!" The creature introduced itself via a very limited form of telepathy, and after it was considered non-dangerous and unrelated to "Walking Furs" (the monsters), it was allowed to stay in the house.

"Blue" (due to it's chosen coloration, which refers to 'blue fox' which actually is kinda gray) is a shifty that assumed the shape of a furry coat. It feeds on the warmth released by its "wearer" and absorbs any umidity like sweat, and in return, keeps them warm and cozy and helps them with any tasks it knows well and involve arms movement, like building houses and carving pots. It can communicate to whoever is wearing it via short-ranged telepathy, and it has already stated it likes to feel useful by helping the girls out. It has a great array of crafting skills, from woodworking to tailoring, but since Lola is the "official" tailor and Desireé and Liana are the official blacksmiths, Blue prefers to keep sculpting wood.

Blue is also known to like "night snacks" as it calls it, sometimes crawling to one of the girls' beds at night and enveloping them. While some of them find it a little bit too intrusive, others enjoy the opportunity and sleep the whole morning, unwilling to leave the warm bed. Blue does not understand why some of the girls don't like it to cover them during the evening, once no one gets injured, and keeps doing it from time to time.