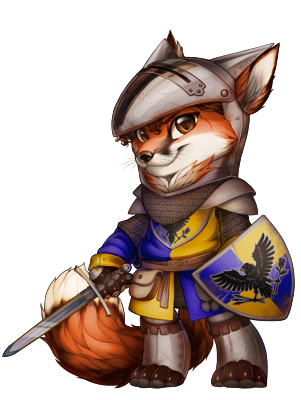 
Born to a knight, one of a fairly great deal of fame in hamlet of a city - nestled on the coast some distance from any other nearby settlements - and a duchess, great, gentle and loving lady and fourth cousin to the realm's king. Reginald's life was without want. He had nearly all the things his heart desired as a child, yet he knew somehow he was...different from the other boys around his age. And this difference wasn't the good kind to the peasants he walked amongst.

Reginald was nearly the perfect knight; he had good looks, talented and skilled in a couple fighting styles including his own unique form of swordplay, but his downfall is a secret he desperately conceals from all. One that would have his father and head of the baron's personal guard, run him through with the very sword Reggie was knighted with.

Only a handful know his secret, and fears that one day he'll slip up and give it away. Of coarse, this'll be nothing but a distant memory once he gains the courage to leave the little hamlet...

Artist notes;
- Has slightly messy, curly, shoulder length hair that's usually in a ponytail.
- When not in his armor, he typically wears a simple tunic, tan leggings and brown, fur trimmed calve-high boots.
- The mark by his eye is a scar not a marking.
- Sword must be drawn with him. Scabbard is fairly plain.