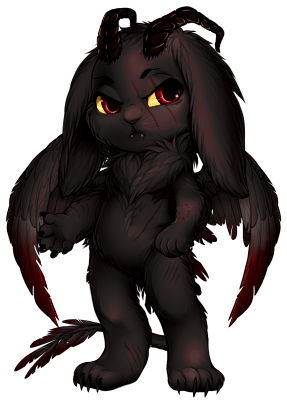 Once a feared predator, Scyn is one of the few remaining of his kind and is kept mostly in captivity. He doesn't remember much of anything of his parents or childhood in general, only that he was always taught to obey and follow orders, even if it fells out of place to do so. He is primarily an 'attack dog' with no real social skills besides immediate hostility and has little to no interest in much else.

The feathers of his wings and tail are always in a tattered state, but he is still able to fly normally. His horns have been broken numerous times in his youth, following his many escape attempts, resulting in them being asymmetrical and crooked.

He's reluctantly obedient most of the time and carefully guarded, showing little to no emotion besides anger, disgust, and frustration. However, underneath the facade he's affectionate, gentle, fiercely protective and often feels quite lonely. But no one has ever actually observed this behavior. No one knows how he ended up in Dragonsmaw either, and asking results in him flying off for hours on end.