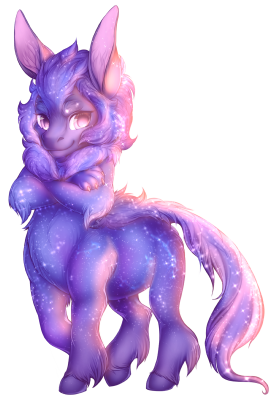 No one really knows where Naktion comes from; he avoids any questions so fluently with half answers you would never think that he is actually hiding it.

Nayrem met the fellow fighter on an adventure deep in the Quetzal lands and somehow, the two struck up an unlikely friendship. Though it may seem rather one sided at times, Naktion putting up with grumpy warrior's moodiness, the two have already had each other's backs in quite a few adventures.

Naktion sometimes permits the cat and their other friends take a ride on his back - it is always a beautiful journey, as the saggitarus is capable of flight, though no wings adorn his back. It is as if the air itself carries him towards the stars that he is so much alike.

The markings on his soft fur changes, as if mirroring the sky above, making him look like walking piece of galaxy. (He even seems to leave a trail of stardust in his wake.) His closest friends believe that in a way, that's exactly what Naktion is. The warrior's knowledge extends beyond that of a simple villager, his affinity with air and space undeniable.

In day to day interactions, he hardly seems ethereal and strange creature, however. Albeit with spouts of philosophical musings, Naktion is friendly and even goofy, loving to make others happy. Amazingly patient no matter if it comes to friendships, crafts or hunts, but never afraid to jump straight into some crazy adventure. No one can accuse him about lacking courage, that's for sure.