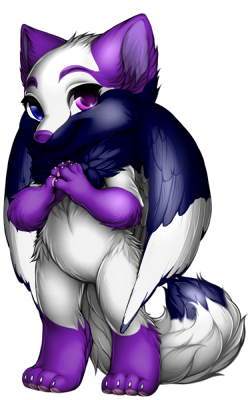 (Thanks to Tokei for the paintie!)
Asexual panromatic | he/him or she/her; (s)he, his/her when generally referred to | Chaotic Good

A kleptomaniac marble fox/magpie hybrid who can't fight at all, but is very proficient in the ways of the thief. S/he is capable of freely changing biologically between male and female.

S/he and Luneth don't get along well at all, due to Argenti's fear of unsanitary places, and the fact that Luneth's pad is exactly that. Plus, Luneth tends to be particularly aggressive toward Argenti in particular for some reason, especially since they tend to bump into one another quite often when exploring.

Likes: Stealing from the rich and giving to the poor, lighthearted pranks, shiny objects, forests
Dislikes: Spicy food, unsanitary places, getting caught while stealing, Luneth (poor fella just had have a crotchety jerk with a filthy house as a next-door neighbor)