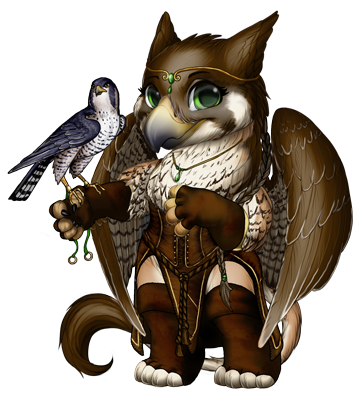 
Personality: Some would call Rosalynd 'spirited', others may call her a 'shrew'. She loves the outdoors and hunting and abhors the noble/courtly life she was born into.. She's more likely to be found riding fast, hunting boar or climbing trees then spending time in court, and when she does have to spend time in court she's daydreaming about riding away. Rosalynd is the happiest when adventuring far away from home encountering strange new lands, new people and new animals to hunt for trophies.
She deeply loves her hunting falcons, griffon mount.. and more then anything else her husband Onwen who is a constant source of both adoration and frustration.

During her early days as a Duchess of Endier and later due to her horrid entrapment in the realm of Ravenloft Rosalynd developed a mixture of phobia/hatred of the undead. She's learned to apply her hunting skills to tracking down and destroying the unliving and when not too shaken from the encounter attacks them ferociously. Her phobia has developed into a 'fight or flight' reaction with the undead, and she has trained her falcons with varying undead fighting techniques.

Powers/Abilities: A skilled tracker, stealthy hunter and falconer. Wild Empathy with animals and sharpshooting training (originally with the crossbow, recently she's been introduced to more modern firearms and adores revolvers).
Bloodline Powers: Healing (healing touch once a day), forest walk ('pass without trace, and always knows direction in the wilderness'), detect life (sense plants and animals, type/kind/number, at will), enhanced sense (more perceptive outdoors), animal empathy (hawks - speak with, empathy with, hawks regard her as an ally and friend and will not attack her).