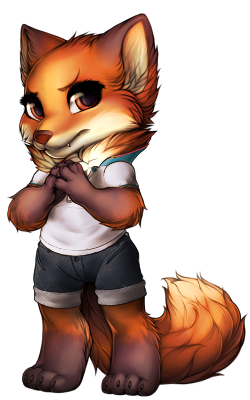 She totally isn't based on my character from GTA V

Samantha is a young-ish, red fox (24 years old) that heralds from an indeterminate Russian speaking country in search of better life prospects. As a youngster, she was often bullied for simply being a fox, stereotyped as being nothing more than a liar and a thief; an impression that left far too deep of a mark on her sub-consciousness.

As she got older, the bullying continued until she finally snapped and got her own back on those that gave her so much trouble over the years; turns out that a frightened, cornered fox is quite dangerous...

Despite the bullying finally coming to a stop, the damage was already done and she had fallen into the stereotype she resented so much and was often caught for petty theft and shoplifting before moving on to more risky things such as burglary and armed robbery.

She was pretty good at being bad, it seems.

Soon enough, Samantha was involved with mobsters and the likes; her crimes becoming more and more dire, occasionally even being politically fuelled. At the present time, she is more mature and understands her predicament but feels as though she's in far too deep to leave...

Because of her criminal history, Samantha has knowledge of "herbalism", "exploration", being a warrior and medicine/first aid.

If you can tie those to criminal acts, well done.

As for her preferred attire, she likes somewhat feminine things but not terribly loose unless the situation's appropriate for it (which isn't often).

Her go-to outfits usually consist of a shirt (polo or otherwise) and a skirt or fitted trousers/shorts; anything form fitting and comfortable is generally what she would opt for. Usually, she'd avoid skirts, but shorter ones aren't much of a hassle and are well suited to having a tail.