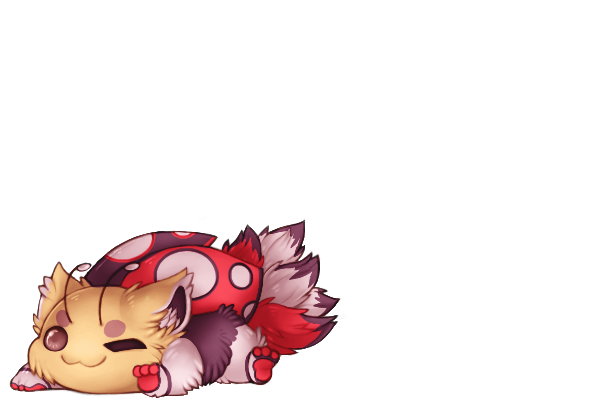 Konundrum is a living Taiko drum, however, to blend in with the furries of Furvilla, he can transform into a species called Purrpoof BugCat. Although, all the time within Saibon, he is seen as a Taiko.

his spirit was infused with an old, small taiko, bringing him to life
his ultimate goal is to get many villagers of Furvilla to play and share the love of taiko drumming
he is an english drum even though the taiko is Japanese
adores Japan, decided to live in Saibon because of it
is currently learning Japanese from many villagers of Saibon
spends most of his time with Tai and Ko, the Taiko Twins, and his best friend (who is also a Taiko), Humdrum
says "ba-dum" after every sentence, also substitutes with "ta-don", "-don", "da-don" sometimes, as a Japanese alternative
eats a lot, loves every kind of food
is often perceived as a very young drum, he doesn't know a lot about the world in general, he is pure
10in taiko. small

Favorite foods: If you put anything that looks lke food near him, he'll eat it
Favorite colors: Yellow, Purple, Red

State of Residency: Permanent
For Sale or Trade: No

The species Purrpoof Bugcats were made by Dragonpud! Do try to get your own, they're super cute! Also thanks to dragonpud for allowing me to edit the base ^w^

The Taiko Drum, Konundrum, is not actually apart of this paintie! It's a picture in the background, I thought i'd add it because it looked a bit like furvilla's style. The paintie is just the Bugcat :3