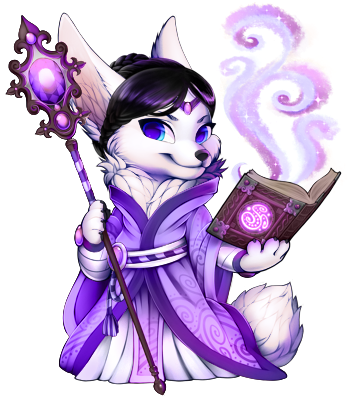 Anastasia no longer has a house! They will be unable to work. Please replace the house or move Anastasia into a FC slot.

Anastasia was originally from a tiny little village near Tiger Eye Peak; she lived in the woods because the village was extremely fearful of any sorcery.

Anastasia would do all sorts of magical experiments and they always seem to end up in explosion which made all villagers from the small village nearby fear her more and then one faithful day where the snow was dropping lightly the villagers had enough, one of the villagers riled them up, they were picking up pitchforks and torches until a certain Angel Puppy and a warrior angel with four white wings heard the angry villagers the Angel Puppy looked up the warrior, he smiled and said he will calm them before it gets nasty,

The angel puppy walked up to one of the female villagers while the Angel Warrior calmed the male villagers and not go do any foolish the angel puppy smiled and asked nicely what has made all the villagers all frightened and they replied that an evil sorcerer lives in the woods and they spoke about curses and all mean things the angel puppy frowned and asked where this "evil" sorcerer lived they told her that 'he' lived in the woods nearby cooking all terrible spells and them heard explosions coming from about north from the village the Angel felt a bit annoyed "Magic isn't evil..." she said angrily when the Angel Warrior managed to calm the villagers and deal with this "menace" The angel warrior sighed "Angel, you know in your heart, that magic isn't evil, its how you use it, magic is magic.."
"I know Theo; I know... if I can bring this sorcerer back to Quetzal Palace and let them be free and do whatever, perhaps let them explore around, Theo smiled and nodded "you always have a good heart Angel, even with that temper of yours" Angel coughed embarrassedly, and they continued in silence until they heard another explosion which made Theo and Angel run to the location when they heard the explosion.
Then suddenly an angry female voice was heard within the rubble of the ruined cabbin "NOT AGAIN I am so tired of this!"

Angel ran up to cabin which was in ruins and spoke out "Are you alright?"
"What do you want?. Huh? Did you just ask?"
"Yes, Are you alright?"
"Yeah, yeah I am alright, were you sent by that stupid village?"
"Can you not call them that? They are scared."
"Yes of me trying to a magic spell and it just ends up in explosions!"
Theo walked up and helped which turned out be a white vixen; Angel was surprised
"What never seen a girl before?"
"No um.. the villagers kept calling you male and such" the white vixen laughed "That village? I am so sick of them coming at with pitchforks and whatever they have at me because I accidentally blew up my cabin more times I could count" Angel sighed "Perhaps you can move to my village, do not worry magic is not feared you can ask my Herbalist Cecily, she is a Wiccan."
"That's different magic; witches are just weird. I am a sorceress a sorceress! There is a difference! I make things materialize with a wave of my hand!"
'I apologize I was only..."
"Yes I know perhaps, I should move to your village and do whatever."
"You may explore it's your choice!"
"Yeah yeah I will come, I was sick of this dump but be warned my magic can blow things."
"Don't worry the houses in Quetzal Palace are magic resistant since the village is in the clouds."
The Vixen stood there, their mouth agape.
Angel giggled "Don't worry, you not dead, all living or angel alike live in the village, come you will like it."
"What's your name? M..my name is Anastasia,"
"Angel and this warrior here, he is the main warrior of the village named Theo."
Anatasia bowed and went to pack her spell book that's what left of her demolished home and followed Angel and Theo all the way to Quetzal Palace, there Antanasia found a home where she could study her magic and do all the spells she can do freely.

Even with the massive explosions the houses stood tall, which made Anastasia really excited to live there, so she ended up exploring the wonderful area of Quetzal Palace bringing all types of things for Cecily the village's herbalist, Rusty the Aussie Construction worker and many other things to help keep the community in top condition and not once she was complained at for her magic that's all she wanted was to do her magical studies in peace.