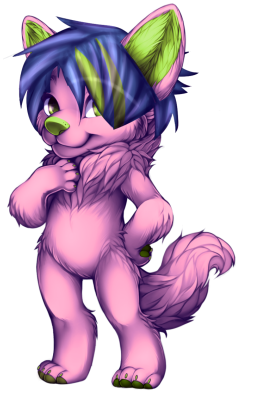 Art by dyanwolfe || Paintie by DarkaosZS || Profile Code by MomoShino
Boyfriend was made as a joke OC by a friend of mine who, after many years of having him just lying around her PC, gave him to me. I revamped him slightly but kept him mostly the same.

Boyfriend is an arrogant, self centered, vanity obsessed Scenewolf, with some very faint Sparkledog lineage. He enjoys smoking and gardening, if you catch my drift - wink wonk.
Though, he's typically classified as a jerk, he's actually a very loving guy, once you get to know him. He'll do just about anything for the ones he loves.