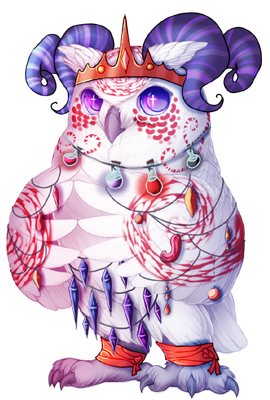 Personality: Cold, aloof, vague, wanderlust, calculated, vain, egotistical, honest, strange, unsettling.
Gender: Male.
Accent: Elderly, English.
Quirks: Tends to channel spirits randomly.
Species: Fallen Angel.
Age: Eh, who knows to be honest, he's been resurrected that many times.
Significant Others: Pfft...
Enemies: How long do you have?
Possessions: Everything he wears and a ghost scythe he can summon at will.
Skills: Again, you want a list? He's proficient at nearly every fighting style, he can use dark, black and necromancer magic. He can also use healing runes and summoning circles. I wouldn't even try to fight him to be honest xD
Career: Necromancer.
Weaknesses: The four elements. Also Iron. He's immortal though, so yano, you'd better be creative.
Likes: Death, creepy stuff, undead, graveyards.
Dislikes: Anything cheerful, or colourful haha.
History: Revenant started out life as a normal owlet, until he and his family were killed by a pack of foxes. He was resurrected by a kindly necromancer, who took it upon himself to teach Revenant his own ways. Little did he know the owl had already transcended into heaven, gaining his angel wings. But as being brought back to life is thought of as a dark art and therefore "illegal" in heaven, Revenant was outcast and became a fallen angel. The necromancer became corrupt with power and started using Revenant to do his bidding. They were both killed in battle against a demon, the demon brought back Revenant...and this has happened a few times since. Until Temmie freed him, not that he appreciates that, or anything really...

Love is the red of the rose on your coffin door...
What's life like, bleeding on the floor...