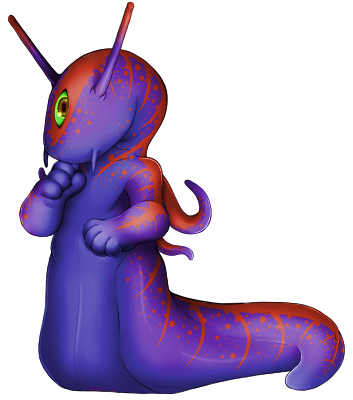 Fleur simply showed up one day. He was in Lunney's garden, eating away at some angry roots and eyerises when he was caught. Instead of shooing the strange slug away, Lunney told him that he could eat some of the plants as long as he helped grow some too. Lunney was suprised when he got an 'okay' in response. Fleur settled in nicely, no one seems to mind having him around except for Quill who is mildly annoyed by the thick trails of green slime he leaves behind. As such, he usually stays outside which he prefers anyway.

Fleur's personality is simple, as is everything else about him, save for his origins. He gives straight forward answers unless he truly doesn't know how to respond, in which case he settles for odd gurgling clicking sounds. He makes friends easily and enjoys any sort of affection, both giving and receiving. He's very intelligent and surprisingly strong given his appearance, but gets in trouble a lot with his child-like curiosity.

- Loves eating plants and does so loudly
- His favorites are Eyerises for their squishy eye part
- That weirded everyone out except Lunney
- His second favorite is Angry Root because they wiggle
- Prefers staying moist, so he's always in water or drinking liquid
- That got him banned from Lynn's alchemy and medicine room
- Vane also doesn't let him in his sewing room because he slimes all over his materials
- Doesn't like mouth beans and chompers because they bite too much
- His moods include: Happy, Blank, and Curious. Rarely are they ever angry.