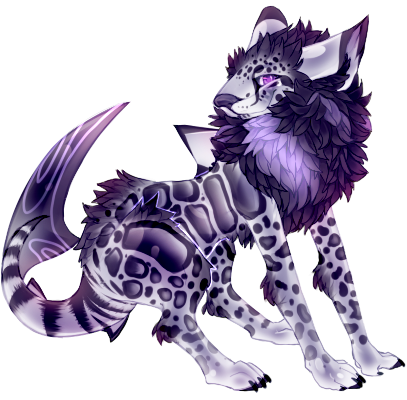 He remembers the way his sister's soft green and gold skin shone in sun when she leaped above waves, the chittering laughter of his two other sisters when he chased them around a rock and their brother who was the king of hide and seek. He remembers the way their mother, with colors of black and gold, was more beautiful than any coral he had (and will) ever seen.

But memories is all he has left of them.

He can blame himself (he does), yet it does nothing to bring them back from the clutches of bipedals. It does not change the fact his curiosity, his insatiable interest in the land and its creatures, brought his family straight in the arms of two-legs, that, urged by mother and siblings, he slipped into water and swam as he could, believing they were just a little bit behind him. That soon he will get a scolding of his lifetime and eventually go sleep in their cave, all huddled together, like they always did.

It was not meant to be.

Kerein is known for his temperamental nature and his normal state being 'grouchy loner', though the latter term might not be appropriate as he has few close friends that withstand his temper tantrums and patiently wait when he will be done with occasional sulking bout.

There is still a good deal of curious adventurer left in him, but the Haikatt does his best to check every aspect and detail of any potentially dangerous place or situation. He does not trust easily, a natural at picking up cues if someone is being honest or not. (But, unfortunately, he often doubts his instincts outside of hunting.)

His brain is full with all kinds of information about the sea-world and also above, his interest extending beyond what can simply fill his stomach. Recently, he has started looking into natural remedies under guidance of an older Haikatt. All of it makes him an interesting conversation and exploring partner, if only you get him to talk.

It might be a bit of stretch to say that there is heart of gold hidden behind his tough exterior, but Kerein is definitely a loyal soul. His one betrayal - of his family - haunts him and now, he'd rather lose his life than leave someone he cares for behind or in danger. With that also comes brusquely showed caring for anyone who has earned a place in his heart. And even before that, he is not likely to pass by anyone in trouble.

He is fast both on land in water, one of the fastest in fact. The dark purple fur is water resistant and helps insulating the body when he dives deep or surfaces on a cold night. Naturally more adjusted to land-life than some of fellow Haikatt species, he loves to sunbathe on rocks - but only if no humans seem to be present.

Skillful hunter, he always has his fill of food and is not afraid to go after harder to catch (or more dangerous) prey. What he lacks in size and weight, he more than makes up with his speed and agility.

The spot pattern is akin to that of some of rarer fishes found in the endless waters, but aliens find them more akin to that of actual wild cats. Kerein's coloring is unusually light for a lion Haikatt, but so was that of one of his sisters.