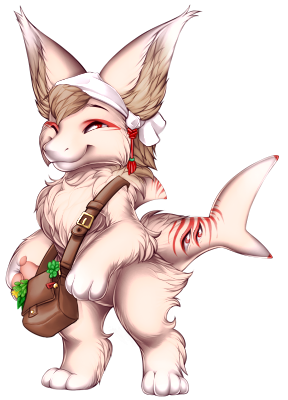 """"According to legend, a creature called kutabe, thought to be identical to the Bai Ze of China, once appeared on Mount Tateyama in Toyama Prefecture and "predicted that a deadly plague would sweep through in the next few years. The beast prescribed that its own image be used as a talisman to ward off the disease, and since then the hakutaku has been worshipped as a guardian spirit of herbal medicine.

Kutabe is a flirt and a lush, but he can be a pretty nice guy and always tries his best to be helpful.

Though he has no gender, Kutabe takes on a masculine appearance.