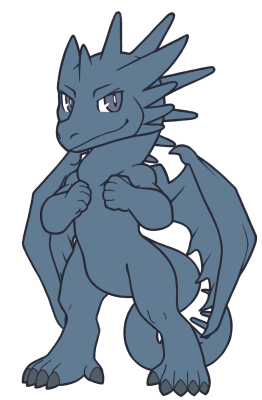 He likes fruits and fruit juice, coffee with way too much flavoring, pecan pie, and fried noodles.
Loves the rain - the sound, the colors, the atmosphere - but doesn't like getting wet. Most active at night. Favorite color is blue. Can't swim. Has terrible handwriting. Doesn't like the cold despite being a frost dragon. (A dragon's element is defined based on their breath's magical properties, not by their personal preferences or their habitat.)

Corvus is a very sentimental sort, and gets attached to things, places, and people easily. Outwardly, he seems to have a strong hold of his emotions; he has an air of coolness and competence about him. In reality, he's a bit of a doofus and is very quick to get emotional. One moment he'll be calmly handing out sagely advice, and the next he could be sobbing openly over the issue he is giving advice to resolve. When given personal attention, he gets flustered and bashful.

He earns a meager living by working as a private investigator. Not that he gets any shortage of work, or that his expertise isn't valuable, it's that he doesn't tend to charge much for his services. Corvus may even waive his fee entirely. Though far from brave during confrontations, he has become confident during investigations, granted everything goes according to plan.

Choosing deliberately to settle in a locale which gets little attention from law enforcement, Corvus has stepped into a life of constant conflict, danger, and tension. Despite his cowardly tendencies, he took it upon himself to try to bring a bit of hope back to a population whom justice forgot.

This dragon's den is a small one; a crowded office in front and tiny apartment in back. A set of stairs with an iron railing leads from an alleyway to a balcony, which serves as a front porch for his second-story home.

Because of rumors started by bystanders who have never met him and by those who are embittered by his success, Corvus' reputation is less than great. He is described as being sleazy and self-serving, using artificial charm to emotionally manipulate his clients so he can squeeze more money out of them. There is also the idea that he is a criminal himself who sells out others for his own benefit. All this couldn't be further from the truth, of course, but Corvus has learned that denying these allegations only proved to reinforce them.

-Google .doc with his inspirations and some worldbuilding-