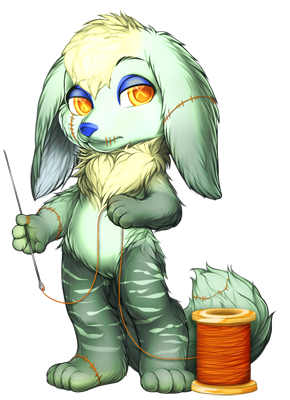 My dreams are old and faded and my head feels thick and useless.
We're on the road to nowhere but we won't arrive tonight so let's go home.

A somewhat sullen character, Danchu is a living plush doll containing the spirit of the sickly inventor who created it. When the man was close to death, he used a forbidden technology to transfer his soul into the doll--and when he awoke, he had no memory of his name or his previous form. He only recalled his craft and his drive to do it, and so he spends his time making other small plush critters with artificial intelligence minds of their own. One of these took a shine to him, a little birdlike creature named Felt, and keeps him company.