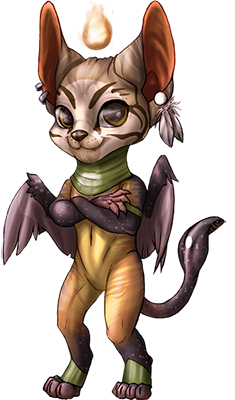 Meskhenet no longer has a house! They will be unable to work. Please replace the house or move Meskhenet into a FC slot. Name
- Meskhenet Asim Eshe
(Name meaning - Destiny - Gurdain of Life)
In Ancient Egyptian mythology, Meskhenet, (also spelt Mesenet, Meskhent, and Meshkent) was the goddess of childbirth, and the creator of each child's Ka, a part of their soul, which she breathed into them at the moment of birth. She was worshipped from the earliest of times by Egyptians.

Gender
- Female - she is flat chested

Age
- Unknown she is a goddess ( but is young still)

Interesting Fact
-Markings - The spots on her body can glow at night or in the dark, they reperent the stars.

-Fire jewel - can be controlled and all fire comes from it. Can make fire objects to a fire shield or pretty much anything with fire. If teh fire ever burns out she is died.

Personality
- Adventurous but always curious about the world as she thinks about it alot trying to find her purpose in life as she changes the lives of others. Has a kind heart to everyone unless someone is heartless then she won't put up with that. If something threatens her she jumps at opportunity to fight as she doesn't play fair in fighting. she use fire in anthro but as a feral she uses speed and flying skills. But its rare for her to fight she must have a good reason to stand and fight, usually to protect someone will be her reason to fight. She does hold her thoughts to her self but will speak her mind if it is necessary. She not afraid to make a bold statement or action ether. Leading to her recklessness sometimes but rarely will this happen. One thing that set her off and is when others call her a boy. It will make her look at them oddly and she just shakes her head and speaks in her own language usually to say idiots!