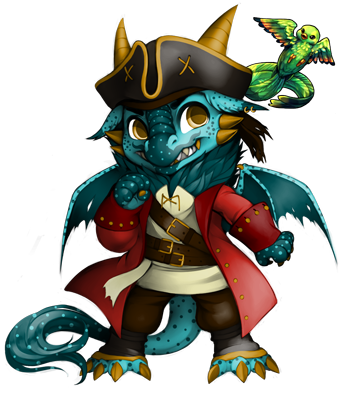 Likes: Raiding, Pillaging, Plundering, Pilfering and Junk Food
Dislikes: Any kind of Authorities, Brushing his teeth
About:
Your average Pirate Captain, Joshamee likes to sail his ship with his crew at his side. Unlike most other Captains though, he's completely honest with his crew, equal in sharing all the spoils from their travels, including the rum.
He would do anything for any of his crew.
His Birb, Emerald, is always at his shoulder. She's very affectionate towards him and tries to protect him whenever she can. She communicates with Josh through a series of whistles and chirps that only he understands.
Though he takes his role of Captain seriously, he has a bit of an immature side as well. He has an addiction to junk food, along with refusing to brush his teeth. When arriving in new areas he'll often run off if he smells food or hears loud music or crowds.
His love of junk food and refusing to eat anything healthy has earned him the diagnosis of scurvy a total of 23 times so far, much to Bootstrap's dismay.