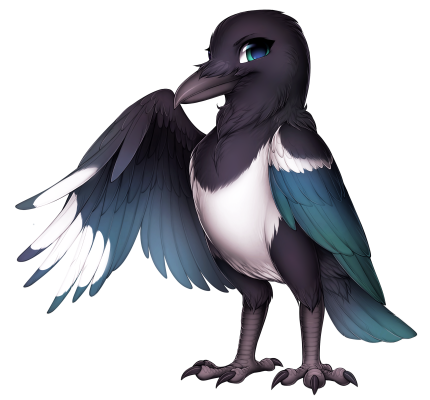 Schatten loves to feel the winds under her feathers as she flies about the villages in search of a new home. She's pretty good at spying shiny new items from those heights, even if it's not her forte.

Her wings have served her well but she still longs for a different form. She hasn't quite gotten it down yet, but one day she's going to make herself a glamour and rise to the ranks of the Fae. She's even gotten her claws on one of the pieces she needs to get this done!

All she really needs to do this is someone to support her dreams and help her get there. Will you be the one to help her rise to the very heights of her imagination?

Schatten soared all over Furvilla looking for a place to stay.
she eventually came across a Falcon heading back to his home from his battles. They conversed a bit and eventually Schatten brought up her dreams to become a Fairy and Faron suggested an alternative as should she choose to stay in his land, she would have to wait. Schatten decided to stay anyway as she took interest in the Raptor.

One day there was a thief going around stealing things and one of those things was her precious fairy wing blueprints. distraught by what happened she hopes to one day get them back but in the meantime she uses the blueprints she bought at a local shop to make things to pass the time until she finds it.