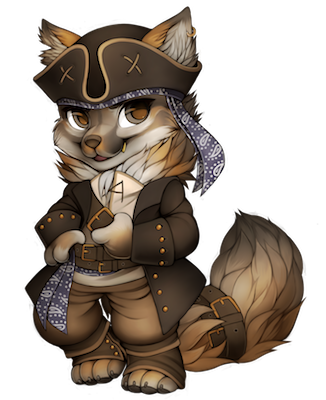 Addy was born to a somewhat famous family, at least in their neck of the woods. Before he was even born, expectations were heaped on the first born of the current head of the von Alders, however it wasn't long did they learn that Addy wasn't turning out how they wanted. He was absolutely refused to do what they wanted when he was in his preteen years. When Adelard turned 12 years old, he ran away from home, leaving his baby brother to take his place and fled across the sea where he knew his family couldn't reach him.

A year later, Addy was picked up by the Black Ravens - a bit of irony when Addy first learn the name of the ship as his family's crest was a crow - and her pirates during a raid who eventually took the boy in and taught him their trade. Ever since then, Adelard changed his last name to Swiftt after the Captain's who adopted him as her son and successor as she couldn't have any children. It wasn't long after did he find his capuchin friend when they docked on an island to weather a nasty storm. Half a dozen years passed and Addy had succeeded his mother whom died during a botched raid from a turncoat crew member.

Of coarse, there'd been a few times his ship - while under disguise or temporarily hired as escort ship - came in contact with the his family. It made his heart soar with pride and joy when he saw a grown up Reggie and the fact he was well, but a pain would prick his heart assuming that his baby brother would probably him for what he'd done to him.