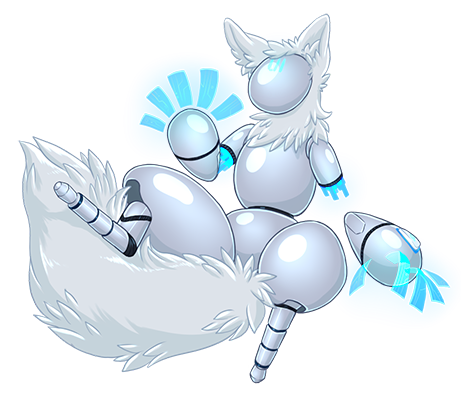 The first in a new line of species named "Synth.OS," 81N4RY.EXE (also called Binary) is a small synthetic lifeform. Its main function is that of a companion droid; each design is chosen from a preset selection, or customized-to-order by the user and the Synth.OS is then tasked with looking after the user’s technological devices by keeping them free of viruses and other problems. A user may also purchase additional functions and features for their Synth.OS if they desire.

Binary itself is a semi-custom model; the main build of it is based on the default shelf model with some minor appearance tweaks and additional functions and features programmed into it. When not doing its main duties, based on its user's specifications, Binary seems to enjoy playing music, storing data, and performing programmed motions such as walking, sitting, and "dancing." It can also be very energetic and, when able to properly stand on its legs and balance, can run very fast on surfaces that aren't too slippery. However, Binary has issues with slowing down and stopping once it gets going due to the design of its feet, regardless of whatever surface it might be on.

Thanks to additional purchased features as aforementioned, Binary also doubles as an MP3 player for its user and accompanies him everywhere he goes. The small and lightweight build of the Synth.OS makes it very convenient to bring along when leaving the house. Another purchased feature is its personality; it takes a while to learn actions appropriate for certain situations, but Binary behaves not unlike a human, at least in gestures and poses.

Binary cannot speak in human language. Instead, it communicates through various playbacks of static, tones, beeps, and clicks. Normally it only emits a faint white noise, but when excited or chattering it can sound similar to an MRI machine, albeit nowhere near as loud. This too, is to its user's specifications, as he is fond of MRI machines and enjoys listening to the sounds they make.

Due to Binary's character, it has no career as there is currently nothing in the FurVilla world that suits a Synth.OS. If something becomes available in the future as the site expands, this may change, but as of right now there are no plans to give Binary a career.

For more information about the concept behind Binary, please check out the [species blog] I've been putting together!

Please note: Synth.OS are a private species as of right now. They may become a closed, adoptable species in future but I am not sure yet.

Binary's design and the Synth.OS species are created and owned by me.
Paintie created by Bullydog !

Binary has been given a baby kiwi by Momma Birb, it's very excited and will take very good care of it!