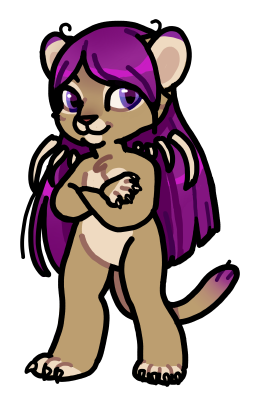 "Alright, let's get something straight here!.....Unlike me."
Hayley is hard-headed, stubborn, and gay. She loves a good adventure, and isn't afraid to speak her mind. She can be rude at times and doesn't have the best sense of humor, but she is a loyal friend. Hayley is about college age, thus making her the youngest member of Silverflecked Village. As much as Rain tries to keep tabs on her, none of Hayley's assigned guardians can ever find her when they need to. However, if you follow the angry screams of those who have just been pranked, you have a high chance of finding her-Hayley's favorite pastime is to trick and prank others.

Hayley appeared out of nowhere during the dark of night, shivering and wheezing from the cold snow which the Snow festival brought about, unconscious on the doorstep of Hedwig's Inn. Hedwig took her in and watched over the panther until she woke up, but upon her awakening refused to tell anyone about who she was or where she was from. She wore a purple color around her neck with a tag that read 'Tawnee', but insisted that she be called Hayley instead. When Hedwig left to notify Rain of the curious incident, Hayley grabbed the first sharp thing she could find and sliced the collar off, then fleeing the building. Any attempts to get her to stay with anyone for more than a few days, or make her talk about where she came from, have always failed. Hayley lurks around the village, going wherever she wants to go and doing whatever she ways to do whenever she feels like it, listening to no one or their stupid rules. She is able to sustain herself by stealing from Hedwig's Inn, but the gryphon doesn't seem to mind.

Hayley, being full of that rebellious teenager spirit, wants to take her self-asserted freedom to a whole other level by becoming part of a gang. Rain has told Hayley time and time again that becoming part of a gang is dangerous and she will not allow such a troublesome group to reside in her village, but Hayley always counters this by saying that Rain has dangerous people-although alone-in her village anyways. Apparently, Rain says that lone troublemakers are easier to keep tabs on, but Hayley isn't having none of it. Even now she's still looking to be part of a gang with a large reputation, or even better, start one up herself.

As the only person in the village within his age range, Sloof has expressed a crush for Hayley, but Hayley has always rebuffed his affections and explicitly stated that she is not, and never will be, into him.