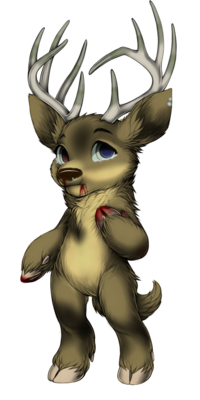 Despair is infected with Lycanthropy. Changes into a beastly monster after exposure to moonlight or especially frustrating board games. Howling at the moon relieves the symptoms for a little while, but use a Golden Apple for best results. Even during life, Despair had always been a sombre soul. He originally hailed from Olde Foxbury, but always felt unwelcome in the village due to his solitary and morose nature. He had travelled to DMM in hopes of finding a society that would accept him, a community where he could finally 'fit in'. After days of navigating the swamplands of DMM, a passing nomad told him of a hidden subvillage named Ghastfen Grove, a colony that welcomed misfits and runaways. Unfortunately, the nomad had neglected to mention the toxic nature of the forest that surrounded Ghastfen Grove. As the sun began to sink below the trees, Despair found himself hopelessly lost on his expedition to the settlement. Misfortune struck the young buck one last time during his miserable life when he succumbed to the noxious spores of the forest.

It was Byron, guardian of the graveyard, who found his corpse. The barghest took pity on the forest's victim, and carried the sorry-looking carcass to his graveyard in Ghastfen Grove, where he respectfully buried him. When Despair regained consciousness, he was in ethereal form, witnessing his own burial. Over the coming days and nights, Byron would be of great comfort to him as he grieved the loss of his corporeal self. Eventually, the pair became friends, and Despair mourned no longer. He realised that it was better this way. There was no pain, no hunger, no thirst; best of all, there were no responsibilities or pressures to live a certain way. He could truly be himself.

At long last, in the company of his newfound friend, Despair had found a sense of belonging in the small subvillage of Ghastfen Grove.