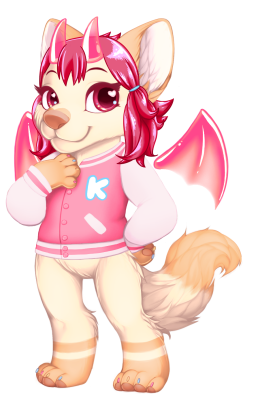 I'm here to make your life a living nightmare

Kirameku is a special breed of hellhound from a special place in hell. This special place in hell is made to torment people who have a low tolerance for happiness, sparkles and bright colors. Kira is part of a wide variety of colorful, sparkly demons that are native to this hell, from hellhounds and other demonic furries like her to candy-colored imps to furries more akin to plushes than animals.

Those who get sent to this happy hell are met with one of two fates; they can suffer its merry torment for eternity, or eventually, they can succumb to its influence and eventually become one in the cast of demons that they are plagued by. Happy hell has many regions, each very different, and each very colorful and full of light and glitter; For those who enjoy such things, this is one of the few parts of hell that not only allows, but welcomes visitors from the world of the living coming to sightsee and explore. There is little darkness, even at night, when the glitter turns into glow and the huge gleaming moon casts its gentle beams of light down on its residents and tormentees.

Others watching her draw

Others finding her cloud hideouts

Others harassing her friends

Flight - She can fly better in hell, but can still fly for short distances in the world of the living

Demon sense - She's attuned to signals from hell and can detect people who need to be taken, other demons and people who have bound demons to them against their will

Kirameku, being native to one of the truly happiest places that exist, is almost always incredibly happy herself. She never fakes being happy, despite how others may think so. She likes talking to people and is very kind and helpful, but she also has a huge ego and refuses to be overshadowed by anyone cuter or more energetic than her. As happy and cheery as she is, She demands total attention and isn't shy about taking down the competition... Everyone wants to be on top, and she's about as merciful as her wings are opaque. (That's not very.)

Kirameku spends most of her time living in hell. She lives in a small region called the cloud islands, which is exactly as it sounds - It's islands floating in a sea of clouds, although the clouds themselves form a region all their own with its own flora and fauna. Kirameku lives in a treehouse on one of these islands, and explores the clouds in her free time. She loves having guests, and often brings her friends from the world of the living to visit.