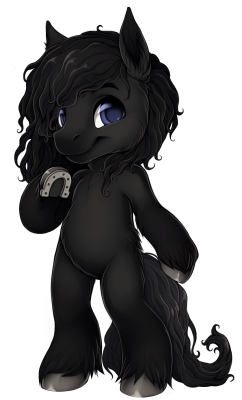 A true gentle giant, Tatonka is big and strong, yet aware of his strength and very careful with what he does. Building things is a good way to make use of his muscles and endurance. There are days when he gets so into his building that he forgets to eat.

But Tatonka also has clinical depression, and sometimes he falls into slumps or relapses. When this happens, he becomes a sad, mopey mess, even pushing his friends away. At times like this, Urasina is often the only one who can pull him out of it, though Faolan tries his best to keep him entertained and make him feel better, and Plume's dance moves help a bit too. Tybalt will often offer a shoulder for the black stallion to lean on as well. Tatonka is very close to Buck, due to both of them having disabilities, and this brotherly bond means the world to both boys. Steppe is always trying to mother the black stallion, and while he likes it, he doesn't generally show it. And he won't admit that it's because he's never really had a motherly figure in his life. Moofy, a young Innkeeper mare, has a crush on Tatonka, and this leads to him getting very flustered, as he doesn't know how to respond. But it's clear he likes her back. Tatonka doesn't like Yukumo much, saying she reminds him of memories he'd rather forget, and he's rather unsure of Kodama as well.