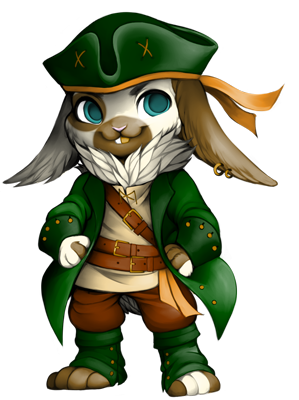 "Good luck getting out of my sights."

Likes: Carrots, Making and testing new firearms
Dislikes: People who stereotype him as a carrot-lover because he's a rabbit
About:
Master Gunner and Sniper of Joshamee's crew, He is responsible for overseeing the repairs and usage of the ship's main weapons and cannons. He has perfect aim due to having excellent eyesight, just never say it's cause of all the carrots he eats.
Coming from an island of rabbits, his gift for always hitting his target no matter the conditions was easily overlooked and considered a waste of time since they had no natural enemies on the island. Being the only rabbit on the island interested in sniping, he spent his time alone, practicing and trying out new weapons. He'd get bullied by bigger rabbits, and truthfully being a bit of a coward, often resulted in having whatever he was working on broken.
One day a rare occasion happened. A strange ship appeared on the shore of the island. Joshamee and Ozkar got off, needing to resupply. They came into the town, looking for a shop. To their surprise, many of the other rabbits had hid, not used to strangers on the island.
Paintie done by Odorokasu that's me~