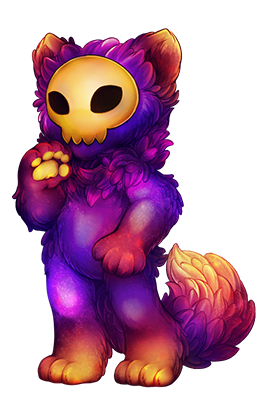 Darśana no longer has a house! They will be unable to work. Please replace the house or move Darśana into a FC slot.

A minor deity, who has 'fire' powers. Aka, she can withstand high levels and temperatures of heat that could melt a small planet. This is why she is perfect as the village blacksmith. It's a very hands on task for her, quite literally.

Miko is her apprentince, and she rather likes him, since the forges are typically empty and lonely, due to the intense heat she loves, but others can't tolerate. She likes the company, and teaching someone her passion.

She wears her golden mask to protect her eyes, which are very delicate. This feline was born from a star, so she was nearly blinded at birth. However, through the years she has managed to gain a reasonable amount of eyesight back. Her eyes are still very light sensitive. That being said, she prefers dim places, like her forge.

She had never heard of a kritty until she came to this world, but they are now her favorite animal, due to the uncanny resemblance. Kritties are not the only thing she favors now. Since she descended to this realm, she has discovered many pleasures. She has found that she LOVES spicy foods. However she also despises many things too.