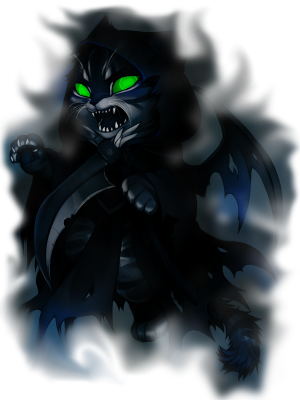 
"Even the smallest feline is a masterpiece." Leonardo da Vinci
Rasalas or Ras for short.
Dead cat, reaps the small moles, shrews, mice, rats, birds, and cicadas around his home. He is a very mysterious little being, Regulus spends a good portion of his time just looking for the ethereal cat floating around his home. Most often, he's found curled up on the bed tired from a hard days work of escorting small creatures to the end. He's even brought a few for Regulus to say goodbye to as well.

Ras Elased Borealis – μ Leonis (Mu Leonis)
Mu Leonis belongs to the spectral class K3. It has a visual magnitude of 4.1 and is about 133 light years distant from Earth. The star’s traditional names, Rasalas (or Ras Elad Borealis) and Alshemali are abbreviated from the Arabic phrase ra’s al-’asad aš-šamālī, which means “the northern star of the lion’s head.”

Rasalas is a tribute of my own black cat, Heath.
Born: April 2009. Rescued: May 2013. Died:February 23rd, 2018.
Character and paintie (C) TheFaroucheLion
Villager CSS by alxq