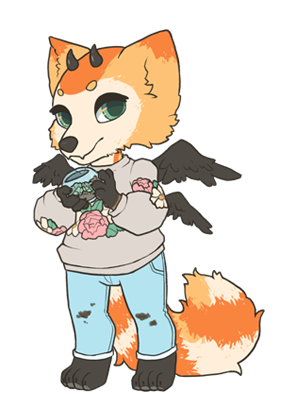 Crumpet is a fox demon, a species known for their trickery and cruel sense of humor. However, this particular demon is the opposite of that. He's honest, empathetic, and loves jokes no matter how awful they are! A perk of being a fox demon is that he has the ability to use spells, meaning his wings and horns can easily be concealed with a bit of magic. Although... his magic isn't the best, and sometimes he accidentally casts a levitating spell instead of an illusion one.

Speaking frankly, he's absolutely oblivious and is almost always in his own little world. You can watch him for hours before he notices your presence, and when he does he can become quite startled. You'll probably want to announce that you're entering his home unless you find it funny to spook him, which is just rude!

His favorite hobby is gardening, and though many of the plants he takes care of dies, he enjoys it nonetheless.