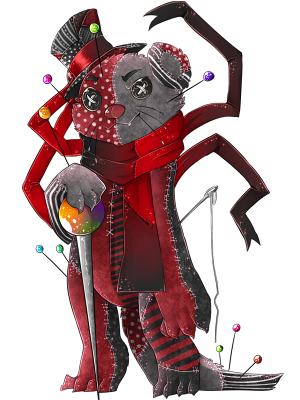 What a lovely W I T C H who has stitched me.

I don't mean to be cruel but only a fool would love something as P L A I N as you.

What a perfect work of A R T, a creature after my own heart.

Fitzwilliam was honest, and a brilliant tailor. He loved his woman and his work passionately. That was before. He is barely the same creature now.

Passion has turned into obsession. Nothing excited him more than fabric, thread, needles and pins. He works without stop making costumes, and sewing fabulous outfits to make other animals more palatable. He doesn't seem to care much for anyone or anything else anymore though another plush creation has caught his eye.

What could be more beautiful than a body made from fabric and thread just like his own? Most normal animals tend to avoid Fitzwilliam now. It's clear he's not who he once was despite the witch's promise. A few have suggested burning him on a pyre, but the Queen loves his designs no matter how mad he may be.

However there is something distinctly suspicious about his hat. It almost seems like it has a mind of it's own...