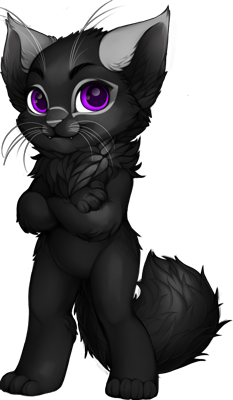 -Listening to-
Roar by Katy Perry

Appearance: A charcoal colored cat with gray eyeliner markings and odd face markings, a line across the nose specifically, with bright purple eyes. Has gray ears. Her tail is long and shaped like an angora tail, luscious and fluffed. She takes good care of her fur.

Jewelry: Always seen wearing a pretty purple flower that never seems to die, in front of one ear. Supposedly it's a magical item. Has no other items on usually but also can be seen wearing a delicate black chain necklace with a purple gem dangling from it. A talisman, she calls it to channel extra magical power.

Personality:
Entity is blunt, very honest, protective and has a good sense of humor. She borders on rather mysterious because of her role as a sorceress, and many refuse to go near her because of how close she is to a black cat. Even if she is dark gray, she still is seen as unlucky. Regardless she keeps an upbeat attitude.

Paintie was done by Frost-Skyder(#67901). The original design of her character is by me.