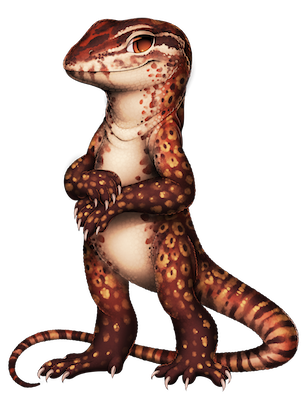 Acai wasn't always a lizard - but if you asked him, he'd be surprised to hear that. One day, when he volunteered to drink a Lizard Morphing Potion offered to him by newbie alchemist Faeryn, it came with an unintended side effect - complete memory loss! Now it's up to his family and friends to guide him through what seems like a new world entirely.

His personality hasn't changed much, though; he still loves taking baths and reading books! His career hasn't changed either. Something pushes him to spend every waking hour exploring, like an invisible pull to adventure.

Though he knows he was originally named Axel (as his friends often still call him it,) he has changed his name to Acai and wishes for that to be respected. Despite Faeryn's fervent promises that his new Lion Morphing Potion will work without a hitch, he's found that being a lizard suits him quite well.