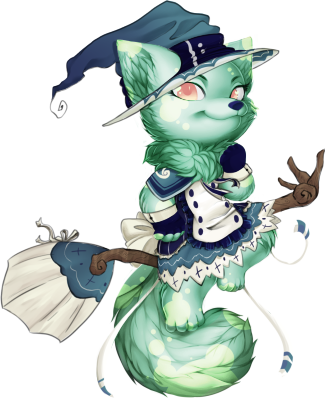 All comments by Edolie are in-character. Consider them a blessing.

Do you honestly think you're my competition or something?
You just don't recognize real talent, Professor!
Behold, my most beautiful masterpiece ❤


The young witch in training, Edolie, knows she's not the best witch around, but it doesn't stop her from trying to make everyone else think she is. Since dropping out of magic school, she is now self educated and terribly theatrical, trying to make a show of the simplest spells. Broken vase? Don't worry, Edolie's got that covered! She'll repair your vase... but also turn it into the most obnoxious centerpiece you've ever seen! Not only that, but it'll be lopsided and will probably just fall over again tomorrow. But if you don't praise her, there will be hell to pay.

The first and arguably most loyal companion a witch will ever have is her broom. Edolie's broom, Star Shooter, was handmade by her grandmother. It is customary for a witch to tie the broom to herself with some of her own hair. Star Shooter has a lock of Edolie's long hair wound around his length.

For Edolie, Star Shooter also doubles as her weapon. He can take several forms, but because of his relatively low stability for a witch companion, any form other than a broom or a wand is difficult for him to maintain for more than a few minutes.

Star Shooter makes a wily companion for the witch. He might not have eyes to express his mood or a mouth to voice his opinions, but Star Shooter has allegiances and preferences completely separate from Edolie. He is not afraid to make his emotions known by jerking through the air when excited or refusing to fly at all when he believes conditions are particularly unfavorable.

For the most part, as a wand Star Shooter is thrilled to serve Edolie and work toward her selfish whims and fancies, so it is rare that he rebells. It is generally only in moments of great anxiety for Edolie that the companion refuses to perform. When asked to cast a reckless and destructive spell, Star Shooter has been known to divert the magic blast entirely, or to simply bloat and fill Edolie's hand lifelessly, like a waterlogged twig.