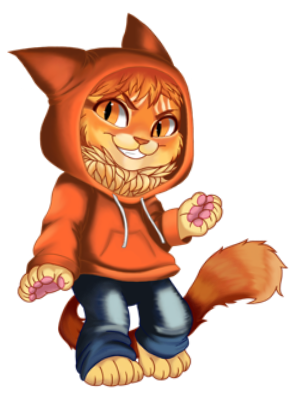 || CSS by Crovilla
|| Paintie by me
Intel appears to have somehow gotten himself employed at Ether's paintie shop. He isn't too happy about it.

A mischief-loving prankster, Intel can often be seen with an infuriating smirk on his face and accompanied by others yelling at him. Intel, of course, shrugs off any scoldings he might get, and continues on. (Well, at least he might have learned his lesson about crossing out the first 'i' in 'painties'...)

Intel is short for his real name, Intelligence. He came from a culture where children are named the first word their parents think of when they are born. Intel believes that his birth name is too pretentious, but he does live up to it. Bold and cunning, cool and calm, he's shaping up to be a real computer whiz. After discovering his talent, he started to go by the nickname of Intel.

Intel is immune to catnip, so he often watches in amusement as his fellow cats turn into excitable kittens. He also likes to pretend to be affected, if only for other's reactions and an excuse to get away with almost anything.

He is rather reserved, even with his friends, and his only mode of communication seems to be snarky quips. Give him some time though, and he'll warm up to you, even if he might not admit it. Intel may not seem like he cares, but threaten his friends and his claws will slip out.

Intel also likes salmon quite a lot. Give him some and you might just see this suave kitty purr!