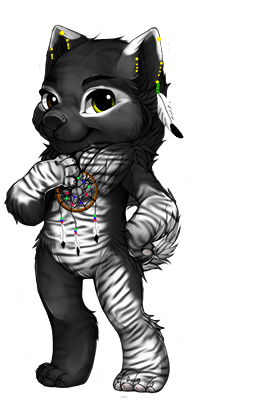 original image
by MainaicJay on CS, commissioned by me.
Original reference (colored by me, lines not mine)

Likes:
Being a Christian
Music
Native Americans
training in the art of the sword
helping others.

History: only she knows. She has been around a long time. As stories have been passed down since the feudal era of Japan.
They say that the Legends of this Akita has been passed down through many generations. Some say she is a spirit of a fallen warrior, some say that she is a Guardian Angel sent to protect those who have no other. But all the legends tell of the Dark Black tora-ge Akita that in feudal times would appear to Samurai in times of trouble. They say that the akita would always lead them out of harms way or would protect them. None have ever seen one like this mysterious fae who, in turn, seemed like a Guardian Angel to all, especially children. People have tried to capture her in ink paintings, oil paintings, drawings, and then Photos, but to no avail. This smart Akita seems to disappear when she is no longer needed or the danger has past. Usually seen with a sword, her markings not only include the tiger stripes of a Tora-ge, but also two different colored eyes. To this day, there have been sightings of this strange Akita. But none can capture her.

Accessories:
Sometimes a Katana, always seen with her Dreamcatcher necklace and feather earring.

How she relates to me:
I am fascinated with the art of Japanese Sword Fighting and hope to learn it myself one day. She is a Akita because they are my favorite breed of dog. Tora-ge because legend has it that they are the smartest Akitas of all. Accessories because I myself am Native American and proud of it. The dreamcatcher and Feather represent that.

Art:
By InkySkies435
by TheDwarfQueen
Theme Song
God’s Bigger Than That
Chris Binion and Scott Moody / Pisgah Ridge Music
Made popular by The Whisnants

V2:
You may face the raging battle of Satan every day
As he constantly reminds you of all your past mistakes
See he's got his eyes upon you - He's trying to turn you back
But he knows you know the answer - God's bigger than that


CSS free to use templates by Lion