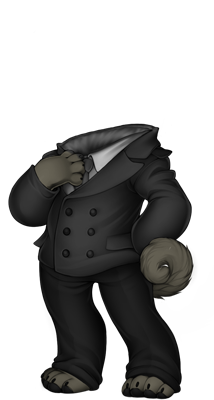 
Dexter is a redound gambler and runs his own casino called "The Lucky Clover". He corners his local market as other casinos either join to his as lesser branches, or strangely get shut down for whatever reason.
Though rumor has it that he's up to much more than simply fixing card games and slot machines. Some say he actually uses the casino as a front for a vast criminal organization that he leads. A lot of people write that off as a rumor, due to his small stature.
Never call Dexter short, or try to pick him up, or baby talk him.
For one it's rude, for two you'll be found in the local harbor if you're ever found at all.
And at all costs, never, NEVER call or compare him to a leprechaun. Yes he's short, yes he wears green, yes he has a literal pot of gold, yes he grows shamrocks, and yes he even speaks with an Irish accent.
But that doesn't mean he's a leprechaun!
Call him such as your own risk! You'll be pushing up daises, or rather, shamrocks.
Overall, when respected, he is a kind individual.

((Dexter replies and comments in character unless otherwise stated, please do not be offended by anything he says or does, he's a mischievous little pupper.)) art by me XD