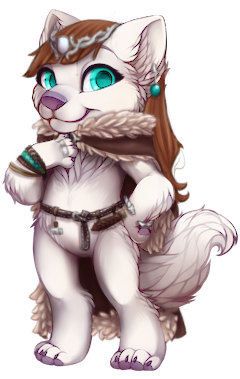 Elska is infected with Lycanthropy. Changes into a beastly monster after exposure to moonlight or especially frustrating board games. Howling at the moon relieves the symptoms for a little while, but use a Golden Apple for best results.

Elska
(You'll think of something eventually)

WIP Whelped on a night of dancing fire. Swirls of green dancing across the dark skies with edges of pink and blue swaying rhythmically. Mani hiding amongst the clouds from the unrelenting Hati. In a heavily wooded forest a bitch of low birth whelped an ashy gray pup by her lonesome.

The unofficial gyðja of the small village, and guardian of the animals. Some say the ivory ulfr is daughter of a certain infamous wolf, but she rather they judge her on the golden saying: We are our deeds. With that sitting in the back of her head she tries her best to be a good heathen day in and day out. Kind and sympathetic and fair. She loves a good jest, but sweetest tongue has sharpest tooth. Do not provoke this ulfr.