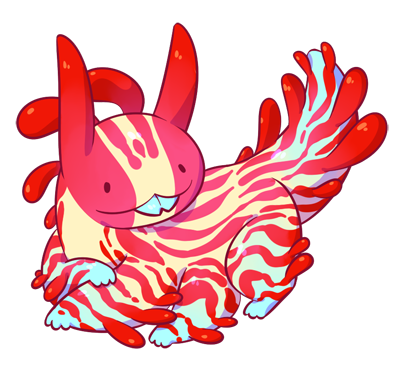 Pleuro is infected with Lycanthropy. Changes into a beastly monster after exposure to moonlight or especially frustrating board games. Howling at the moon relieves the symptoms for a little while, but use a Golden Apple for best results.

He's a mischevous little animal, highly curious, friendly and prone to collect colourful things. He loves corals and shimmering scales the most, building intricate designs out of them to hide within and hoard his small treasures and food reserves.

Pleuro bleps a lot and makes strange bubbly noises for fun, he will likely be blowing raspberries and other sounds if he likes you. However, expect his many protrusions to extend and hurt like a jellyfish sting if he feels threatened and is picked up or prodded against his will. His mouth will also emit high-pitched hissing and screeching if he feels threatened by you or dislikes something in general. Yes, he can be quite a loudmouth no matter how you look at it!