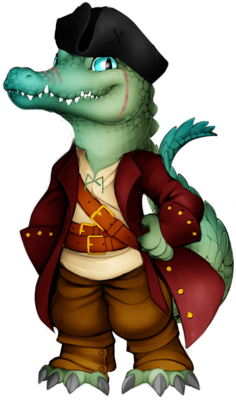 Captain Cove is one of the best captains around in her area, not letting the fact many consider it bad luck for a women to be on board bring her down.

She runs the ship The Sirens Jewel' .

She considers any pirate thats a land animal to be inferior compared to water dwelling ones such as otters, beavers, and herself.

'What are they doing away from their precious dirt? All you gotta do is knock them into the water and they're as good as dead once you dive in after em."

However if bested in combat one will earn her respects, that being said she isn't above playing dirty or breaking her own rules. One of her favourite tricks being challenging one to a sword duel only to use a pistol near the middle.
Paintie & Splice by: Witcher