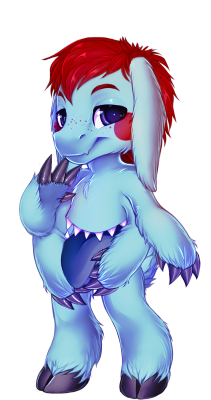 (They/them. Intersex.)
All comments made by Mech are in-character!

A member of an alien species called the "Zhentu". which is an equine-like, four-armed, short-legged creature known for their intellect in mechanics.

Nobody knows Mech's real name, hence their nickname. They are in a relationship with Arytiss and have an artificial child named "ONNO" with her.

They went to college when they were 15 and spent most of their time in the engineering class. After passing with flying colors, they went on to do more engineering-- with the help of Arytiss, they are capable of creating self-sufficient machines that never need recharges so long as they are on.

Mech is also studying small creatures they call Vilstrix, which are sentient computer viruses. They are genetically modifying the Vilstrix and making them useful against things such as terrorists and hackers. Their work helps keep Yfskar safe against intruders and attackers.