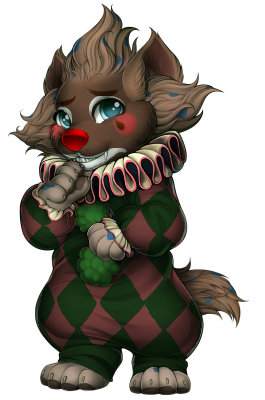 Chucklehead is your classic tragic clown. A hyena born without spots, he paints them on himself, often in bright, incongruous colors, and tries to entertain other animals, though his defect haunts him. It drives him to drink. He incorporates this insecurity in his clowning routine, playing a sad, hobo clown, a la Emmett Kelly.

Rumor has it he's seen a full cut of Jerry Lewis' The Day the Clown Cried and it made him want to kill himself for about six months, but he got better.