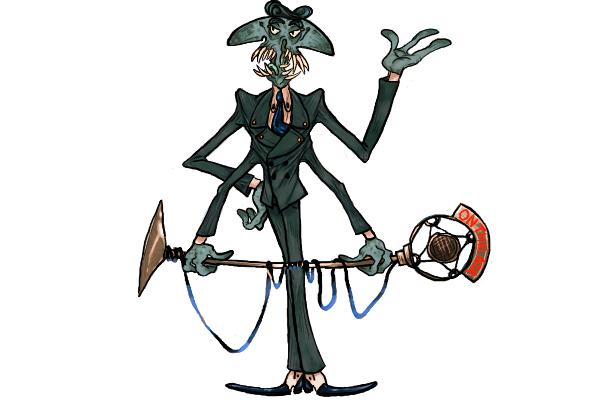 Tags: monster mobster sykes and brunswick my boys my beautiful baby boys i used the gay symbol to represent the fact that they are two people but they are also pretty gay

Sykes Dorsey (left) and Brunswick Rosebery (right) are brothers that share the same body, but not the same thoughts, likes, dislikes, or emotions at any given time.They actually dislike each other quite a bit, so much so that they changed their last names just so it seems like they aren't truly related... even though they are "attached".

Sykes, being the more wary of the two, is more likely to chastise Brunswick for his awful habits, which include but aren’t limited to: Drinking, smoking, and gambling. He finds Rosebery’s singing to be boring and puts him to sleep easy.

And Brunswick being the more bold of the pair makes money by crooning tunes in clubs, and playing his cards at gambling. He takes more risks, and makes bad decisions, and is always eager to push down what his other half has to say, often referring to Sykes as a “Pill”.

Despite their apparent hatred for each other they must live together, eat together, and sleep in a small, and probably quite crowded cot, together, and for someone like Sykes that is quite the handful. Brunswick wants to sleep when he’s dead, eats the worst things imaginable, and drinks like he’s waiting to get an amputation by an inexperienced saw bones, LORD ALMIGHTY.

Their voices are raspy, their attitudes are very differing,
Brunswick being crude and two faced,( no pun intended) he smiles almost all the time even if he’s insulting you.
Sykes being actually really sweet to anyone but his other half. He smiles rarely, and when he does it isn’t too much different from what it looks like on Brunswick, but it sure means a heck of a lot more on his face than when it is on the other rat he shares a suit with.

A little more info about them:

Sexuality: they're pretty gay, and make no secret of this.

Sykes' likes: Coffee, jazzy music he can dance to, and of course canceling Brunswick's gigs last minute just to make him absolutely furious.

Brunswick's likes": Drinking, gambling, flirting loosely and of course keeping Sykes up at night with his crooning.

They both having varying dislikes but the one thing they can both dislike equally is: EACH OTHER

They are both 26 years old but Brunswick loves to brag that he is the oldest by atleast two seconds, which usually wins over arguments of who is the more "mature" if you could even call them that! Sykes on the other hand reminds him that only means he's closer to death by two seconds, he finds comfort in this.

Are they single and ready to mingle?: No they are not, they are taken lads, sorry for your loss.

(Character is mine, paintie by me)